The True Meaning of
BALI

Bali is affectionately and commonly known as ‘The Island of the Gods‘, and yet, most visitors and many expats living in Bali don’t even know what it means and how it came to receive this title!

The name “Bali” means “offering”. And when you have spent time in Bali, this quickly makes a lot of sense!

Still to this day, the Balinese people practice their daily rituals as they have for hundreds of years.  Early every morning, and often again in the afternoon and evening, the Balinese will lay out magnificent and colourful creations on the pavement in front of their homes, shops, schools, temples and even in the middle of a road!

As they carefully place these equisite offerings down, you might hear them quietly chanting a prayer as they rhythmically and deliberately wave incense in the air.

These offerings are known as 'canang sari'.

Canang sari are usually based in a woven bamboo container and include rice, flowers, incense, sweets, fruits, spices and sometimes a cigarette.  This is an offering to the Gods, as a gesture of gratitude.  The philosophy of the offering is self-sacrifice because it takes time and effort to prepare daily.  There are often a few coins in the offering too, which expresses selflessness.

The food within the offering contains prana (life force energy).  This is set out for the Gods to receive, and then enjoyed by the wild monkeys, cats, dogs and other creatures.

Balinese women partaking in a traditional Bali ceremony.  Captured at the beach next to
Loka Yoga School.

This is why the island is commonly referred to as 'The Island of the Gods'.

Made from bamboo, coconut leaf, betelnut and lime, the base of cenang sari symbolizes 3 powers – creation, preservation and unity.  Each power is embodied by 3 Hindu deities; Brahma, Vishnu and Shiva.

Each offering is an array of colours and each colour symbolising a god;

A frangipani flower (known as ‘jepun’) is mindfully dipped in holy water and sprinkled over the canang sari in a symbolic fusion of the four elements.

Whilst many religions and ceremonies are made with an intent of seeking god’s approval and favour, the Balinese canang sari are quite the opposite!  This daily offering is an act of everlasting gratitude, given to the gods every morning as a gesture of appreciation for balance, and a wish for abundance and peace in our world that is renewed each day.

The ritual ends with a little prayer spoken as smoke from burning incense carries the essence of the offering to the gods.  Incense is believed to awaken the gods and symbolises the beginning of the worship. Burning incense sticks fill the space with scent, symbolising the presence of the deity.

Canang sari is not offered when there is a death in the community or family.

A ritual for the whole family…noone is too young or to old!

You can now understand why Bali deserves the rights to it’s name!

Bali’s reputation for their devotion and dedication to spiritual tradition and the rich culture they continue to practice daily is so strong, even Hollywood could not resist the urge to showcase it’s beauty and LOVE!  The famous movie ‘Eat Pray Love‘ (starring Julia Roberts) featured Bali as the place where she finally found absolute connection, truth and self-love, in turn allowing her to open her heart to another (sorry for the spoiler if there’s actually any souls on this planet who haven’t yet seen this amazing movie!) 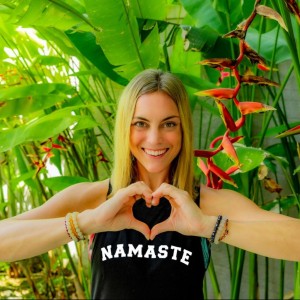 Taryn is the founder of Loka Yoga School. She is an accredited E-RYT500 with Yoga Alliance and expert in Yoga, Meditation and Breathwork.
Tagged BalibrahmaCenang sariculturehistoryIsland of the GodsOfferingshivavishnuyogic philosophy